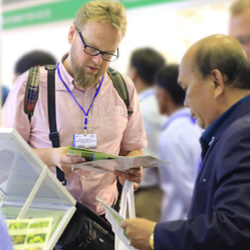 Vietnam is a destination pulling attention of both the horticultural industry and tourism.

Read the characteristics of Vietnam below, and you’ll understand why this emerging market pulls attention in horticulture & floriculture:

The Social Republic of Vietnam, bordering China on the south, is governed by a communistic party with liberal views on international trade.

From north to south Vietnam stretches 1600 km. The country can be divided in 3 parts:

Vietnam has a tropical climate with daily temperatures reaching 30-35°C al year. However, in the northern and central part temperatures in winter are substantially cooler (15-25°C).

Most people are employed in outdoor agriculture. Main food crops include: rice, peanut, cereals and beans.

8% of population lives below the poverty line (UN). In 2018 around 44% of employees worked overtime for an average of 28 hours/month to make ends meet (Vietnam Briefing).

Vietnam has shown an impressive and steady annual growth of around 7% since 1990. This ranks Vietnam among the highest in Asia (Worldbank).
Continued economic growth is expected due to increase of both export and increase of domestic demand.

It has large resources of oil, gas and other minerals.

The country is self-supporting in energy production.

In 2016 Vietnam ranked 4th position in the global Sustainable Economic Development Assessment (Boston Consulting Group). It is praised for converting the country’s wealth into well-being for its population. Middle and upper class will double in size between 2014 and 2020 (BCG).

On Jun 30th 2019 a EU – Vietnam Trade Agreement and investment protection agreement was signed, downsizing administration for import and export, simplifying handling of goods, and deleting nearly all customs duties. It’s expected this development will boost international trade. Read more about Benefits of EU – Vietnam trade and investment agreement for agriculture.
Note: For some major Vietnamese crops, such as rice and sugar, Vietnamese export is still limited to quota, to prevent flooding the EU market.

A bilateral trade agreement with The Netherlands is still in progress (2019).

The Netherlands and Vietnam have a long mutual history in cooperation and trade.

The Netherlands is EU’s largest investor in Vietnam.

Export of fruit & vegetables showed an increase of 26% per year over the period 2009 – 2018, rising to $4 billion.
Vietnam has potential to become a major global player as a flower exporter.

Dutch business travellers require a visa. You are advised to apply for a business visa and not for a tourist visa. For Dutch passport holders an additional e-visa is obligatory. You can apply for it at CIBIT. It is valid for 30 or 90 days and cannot be extended. On date of application your passport must be valid for at least 6 months.

Vietnam is becoming increasingly popular as a touristic destination for its beautiful landscape, hospitable people and tasty food.

The beach at the east is popular for its beautiful sandy beaches and clearblue water.

The best time to discover Vietnam is from January to December. This period you will avoid the long rain season, with regular flooding.

Dutch tourists require a tourist visa. For Dutch passport holders an additional e-visa is obligatory. You can apply for it at CIBIT. It is valid for 30 or 90 days and cannot be extended. On date of application your passport must be valid for at least 6 months.

Buy me a coffee?